Philosophy of Happiness: A Critical Introduction 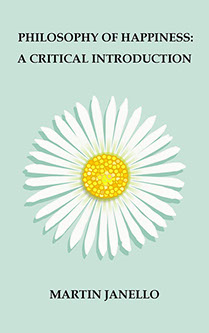 The above-titled article summarizes (a) what philosophy of happiness is, (b) why it should matter to us, (c) what assistance we can draw from philosophy, empiric science, religion, and self-help sources, and (d) why taking an independent approach is both necessary and feasible.

The article can be accessed without charge in written and spoken word on this page below, divided by sections, or in an illustrated PDF format (see first four pages depicted below). See also PhilArchive. Section 9 of this format contains a list of linked philosophical research references. The table of contents in the PDF document links directly to the listed captions. The article is further published in a Kindle edition at the lowest price permitted by

A contiguous audio version of the article (except for the reference list in Section 9) is  available in the Introductions playlist on the Philosophy of Happiness YouTube Channel.

“Philosophy of Happiness” is a phrase used by self-help, religious, philosophical, and empirical inquiries to describe their premises, arguments, and conclusions on what happiness is and how it can be secured. The commonality of this phrase hides a vast variety of concepts and degrees of achievement about the subject. This article provides a critical overview of these contributions. To follow its analysis, we need to start with the fundamental questions what Philosophy of Happiness is and why it matters. The answers to these questions emerge if we examine the component terms of this phrase in relation to each other.